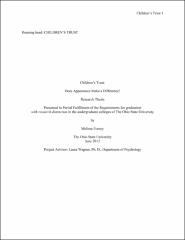 Children learn new behaviors by watching others and then imitating what they see. Previous work has shown that children prefer to learn new things from a teacher who shares their native accent. This preference might stem from the fact that accent is an important cue to social group membership and children prefer learning from in-group members. This study looked at appearance as a cue to group membership to see if it had the same importance as a linguistic cue. Five-year old children (mean age = 65.03 months, N = 33) watched videos of two different women playing with a novel toy to retrieve a prize from inside. One woman was dressed in western style clothing (in-group) whereas the other woman was dressed in a non-western style (out-group). Each woman played with the toy differently to get to the prize. After watching each woman play with the toy, the child was asked to play with the toy to get the prize out. The child was also asked to demonstrate to a parent how to play with the toy. This process was repeated for a total of four novel toys. Data analysis shows that (1) children reproduced the example play actions over 90% of the time even though they were not explicitly asked to and these actions were not required to retrieve the prize, and (2) according to t-test analysis, children showed no statistically significant preference for imitating the actions of either one of the teachers. These results suggest that accent differences provide information about group membership to the children that appearance differences do not.