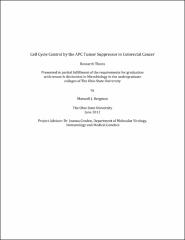 Colorectal cancer is the second most common cancer that affects both women and men in the United States, with a 50% five year survival if the disease is diagnosed with local metastases (Zeve and Chen, 2009). More than 80% of colorectal cancers are characterized by mutation of the APC tumor suppressor gene, named after the inherited disorder familial adenomatous polyposis coli in which germline APC mutation inevitable leads to colorectal cancer (Groden et al., 1991). APC functions as a major regulator of the WNT signaling pathway by controlling -catenin levels in the nucleus and subsequent transcription patterns that promote differentiation (Logan and Nusse, 2004). This work will test the hypothesis that APC has additional tumor suppressor functions independent of ß-catenin regulation. Our published in vitro studies have supported this hypothesis by demonstrating APC functions in the inhibition of DNA replication in S-phase and the promotion of apoptosis (Steigerwald et al., 2005; Qian et al., 2007, 2008, 2010). Additionally, APC has been reported to bind to an enhancer site upstream of the c-MYC proto-oncogene and to directly downregulate c-MYC’s transcriptional activity (Sierra et al., 2006). Consistent with these reports, our preliminary RNA deep sequencing (RNA-seq) data show that a colorectal cancer cell line with activated Wnt signaling exhibits different gene expression profiles when APC is knocked down compared to when APC is expressed normally. A particular interest of this resultant gene profile was a 1.64 fold increase in expression of the CDC25A oncogene when APC was knocked down (Figure 1). CDC25A is a phosphatase that promotes the cell cycle by removing inactivating phosphorylations from the cyclin-­‐dependent kinases Cdk2 and Cdk4 (Ray et al., 2007). We hypothesize that the loss of APC results in the direct upregulation of CDC25A transcript. The loss of CDC25A regulation drives the cell cycle to a much more rapid rate similar to that seen in colorectal cancers. The direct binding of APC to specific chromatin could directly influence tumorigenesis and would suggest the need to consider new therapeutic approaches to the treatment of human colorectal tumors without APC.

I received an award from the College of Arts and Sciences