"For We Who Were Occidentals Have Become Orientals:" The Evolution of Intermediaries in the Latin East, 1095-1291 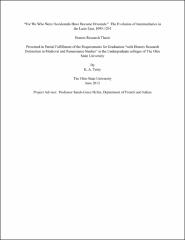 The majority of research on the Crusades presents a dichotomy between Arab-Turkic Muslims and Latin Christians, Muslim potentates and the "Crusader States," frequently depicted as French colonies in all but name. The corpus of political and military history bypasses the subject of practical communication and interaction between groups, not only the Arab-Muslima and Latin Christian, but also the local Armenian, Greek, and Syrian Christian communities. By examining the representations and roles of interpreters, envoys, and negotiators in a spectrum of primary sources, it is possible to discern the evolution of the greater role of the Franks in the Levant. My sources include Fulcher of Chartres’ and William of Tyre's Latin chronicles, as well as Anna Comnena's Greek, ibn al-Athir's and Bahā' al-Dīn's Arabic, Bar Hebraeus’ Syriac, and Matthew of Edessa's Armenian. For non-historical works, I have turned to the Old French Chanson d'Antioche narrative, Ibn Jubayr's and Benjamin of Tudela's travelogues, and Usāmah ibn Munqidh’s memoirs. Legal charters and records, as well as the rules of the military orders provide factual evidence to balance these written opinions. From the interactions depicted in these sources, it becomes clear that the "Crusader States" may be more accurately conceptualized as the "Latin East," in which the generations after the First Crusade grew up thinking and acting not simply as Latins, but Latin Easterners, living in a complex, multi-lingual and multi-religious region. While the evidence to determine their level of acculturation is lacking, it is possible to see these Eastern Franks change their methods of making war and peace, particularly with regards to the background and methods of interpreters and envoys. I argue that the descendants of the early Crusaders came to think of themselves as long-term members of a Levantine community, demonstrated by their patterns of interactions with other members.