Aquatic Metabolism and Water Quality in the Fifth Avenue Dam Pool of the Lower Olentangy River in Columbus, Ohio 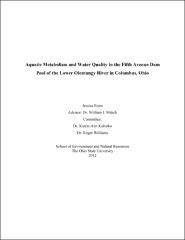 Dissolved oxygen diurnal patterns of aquatic systems can be useful for indicating the presence of organic pollution. Changes in diurnals can be seen after pollutant loadings increase in a water body, especially after heavy rain events that cause runoff and combined sewer overflow. A YSI 6600 sonde was installed on December 3, 2008 in the Fifth Avenue Dam pool of the Lower Olentangy River, which experiences urban and agricultural runoff, as well as combined sewer overflow events. Thirty-minute interval dissolved oxygen (DO) readings were analyzed for the period June 1, 2011 to January 31, 2012. Diurnal curves were analyzed for twelve 24-hour periods from June to September, 2011 during base flow conditions, as well as July 24 and August 19, 2011 during flooding conditions to capture the effect of flow on DO diurnal patterns. Under base flow, diurnals exhibited typical patterns of maximum and minimum DO levels at dusk and dawn, respectively. During floods, DO levels crashed, then recovered within 48 hours once flows were restored to normal levels. The number of DO excursions below certain concentrations was examined from June 2011 to January 2012. DO levels below 5 mg/L were found to exist most frequently during July and August. DO levels did not drop below 3mg/L during the study period; therefore, the dam pool never reached hypoxic conditions. Diurnal curves were also used to analyze gross primary productivity (GPP) and respiration (R) of the impoundment using the dawn-dusk-dawn method. Both flow and solar radiation influenced GPP levels and diurnal patterns.