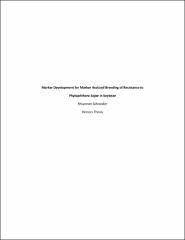 One of the most destructive diseases of soybean is Phytophthora root and stem rot, caused by the oomycete pathogen Phytophthora sojae, which thrives in wet conditions and poorly drained soils. This disease can cause major damage to soybean yields resulting in economic losses. P. sojae has been successfully controlled by genetic resistance in soybean cultivars. Breeding for this resistance is critical to Ohio agriculture and business because of soybean’s importance as an export, animal feed, and industrial product. Current methods for breeding for resistance to P. sojae involve time-consuming disease assays requiring a relatively large number of seed. Alternatively, molecular markers can be efficiently applied to an earlier generation of a single plant from large numbers of breeding lines. In addition, molecular markers can be used for the combination of multiple resistance genes that will provide a full spectrum of resistance against virulent P. sojae strains. Designing these markers begin with the utilization of known sequences from NBS-LRR protein encoding genes that co-locate with the Rps genes. These sequences were used for designing primers with the Primer3 primer/probe design application (Rozen and Skaletsky, 2000). Next, large scale polymerase chain reactions were conducted containing the designed primers and genomic DNA from twelve resistant phenotypes. The PCR products were sent in for sequencing and the results are currently being analyzed for correlation of sequence polymorphisms within the genetically linked NBS-LRR encoding genes and the microsatellite sequences to the resistant phenotypes. Markers will be designed based on the sequence polymorphisms and will be assayed on a larger population of breeding lines that have been previously tested for resistance in order to determine if the markers are predictive for the Rps gene. The developed molecular markers will be implemented in the breeding program by testing F2 individuals and making selections based on these results.