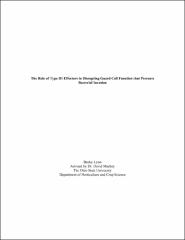 Plants have defense mechanisms that detect bacteria and hinder their ability to invade from the leaf surface to the leaf interior. Specifically, stomata on the underside of the leaf surface can be closed by the leaf’s guard cells to prevent bacterial entry. This defense response can be obtained when the plant recognizes the pathogen-associated molecule patterns (PAMPs) on bacteria. Bacteria release molecules called Type III Effectors (T3Es) that are virulence factors capable of suppressing PAMP-induced defenses. However, it is unknown whether bacteria use T3Es to perturb the function of guard cells. The purpose of this study is to test the hypothesis that two T3Es, AvrRpm1 and AvrRpt2, target stomatal immunity. Supporting this hypothesis, AvrRpm1 and AvrRpt2 are known to perturb the Arabidopsis RIN4 protein and RIN4 is known to regulate guard cell function. The bacteria under investigation is Pseudomonas syringae pv. tomato DC 3000 (Pto). Because Pto produces a toxin called coronatine (COR) that also targets guard cells, we will use a coronatine deficient mutant strain of Pto (Pto COR-). Using a spray inoculation method, which requires invasion through stomata prior to bacterial growth, a growth curve was obtained for Pto COR- bacteria expressing either AvrRpm1 or AvrRpt2 on Arabidopsis plants that are either RIN4 or rin4. Pto carrying the empty vector (without AvrRpm1 or AvrRpt2) is used as the negative control and Pto COR+ is used as the positive control. The ability of the T3Es to help Pto COR- to grow better in RIN4 plants is consistent with the hypothesis that they prevent stomatal defense in a RIN4-dependent manner. To further examine this hypothesis, we will directly observe stomatal defense, by measuring stomatal apertures using epidermal peels following exposure to the same set of bacterial strains.