Analysis of the Thermoelectric Properties of SnTe and SnSe 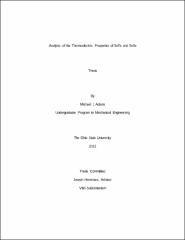 Thermoelectric devices, which convert heat to electricity, could play an important role in supplying a rapidly increasing global energy demand. These devices are especially useful because the process is solid state and reversible. The conversion of heat to electricity relies on the Seebeck effect, which occurs at junctions of dissimilar materials. The efficiency of this process is directly related to the Seebeck coefficients of the materials used. One of the most common materials used in devices is Lead Telluride (PbTe). Since Lead is harmful to the environment, it is desirable to find materials that could replace PbTe while increasing the Seebeck coefficient. The objectives for this project were to determine the thermoelectric properties of Tin Telluride (SnTe) mixed with varying amounts of dopants, such as Indium, Zinc, and Selenium. Samples were created by melting materials in vacuum sealed ampoules and cutting a section from each ingot. The samples were tested over a range of temperatures for Seebeck coefficient and resistivity. Zinc was found not to have a positive effect on the power factor. Selenium was fully absorbed into the lattice at 20%, but the material became two phase at 30%. Indium resulted in the highest power factor at 2.5%, although there is uncertainty in the measurement.