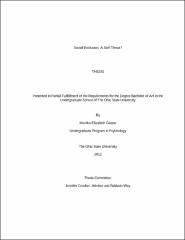 Ego-threats are defined as events in which an individual’s desired positive self-images or self-esteem is challenged (Leary et al., 2009). Research has shown that ego-threats, such as stereotype threat (Schmader & Johns, 2003), interfere with working memory capacity. Social exclusion has been shown to have similar effects as ego-threats such as decreased prosocial behavior (Twenge et al., 2007), increased aggression (Buckley et al., 2004) and risk-taking (Twenge et al., 2002), and impaired cognitive functioning (Baumeister et al, 2002). We are investigating social exclusion as a possible self-threat rather than primarily a social threat. We predicted that social exclusion’s effects on cognitive functioning are due to individual differences in contingencies of self-worth, specifically appearance, others’ approval, and competition, but not rejection sensitivity. We tested our hypothesis by including relevant moderator variables, manipulating social exclusion, and measures of working memory capacity and intellectual performance. Results showed that social exclusion decreases cognitive performance on an intelligence test, and that this effect is moderated by individual differences in contingencies of self-worth (N= 82).