Vocabulary Development in Young Children: The Influence of Maternal Factors 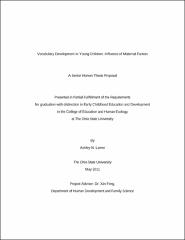