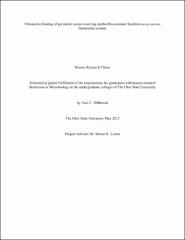 Staphylococcus aureus bacterial infection is a serious problem in medicine. The initial and necessary step in virtually all S. aureus infections is binding of a bacterium to surfaces within a host (e.g., tissue or indwelling device). One of the most important binding reactions is between human fibronectin (e.g., presented on endothelial cells or coatings on prosthetic heart values) and fibronectin-binding proteins produced on the surface of S. aureus. I propose that S. aureus isolates that exhibit a clinically complicated progression of infection will show stronger and more frequent binding to fibronectin-coated surfaces in vitro. This study used methicillin- resistant S. aureus (MRSA) isolates from two distinct clinical populations: patients whose bacterial infection resolved within 4 days of antibiotic treatment (n = 7; resolving bacteremia; RB), and patients who still had positive MRSA blood cultures after ≥7 days of receiving antibiotics (n = 7; persistent bacteremia; PB). Fibronectin binding was experimentally measured by using atomic force microscopy (AFM) to probe attractive forces between a fibronectin-coated AFM tip and putative fibronectin-binding receptors on S. aureus cells from each of the 14 isolates. The bacterial isolates that originated from patients that had PB showed statistically higher binding frequency (p = 0.0218), force of binding (p <0.0001), and energy of binding (p <0.0001) relative to RB isolates. These measurements suggest that binding to fibronectin is associated with increased risk of serious infection by S. aureus.