Analysis of Structural Causes of Mass Rape in the Democratic Republic of Congo: An Integrated Perspective 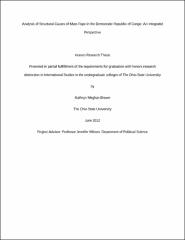 The Democratic Republic of Congo has seen unprecedented levels of sexual violence in the last fifteen years. Explanations for the level of mass rape are varied and lack a consensus. I analyze the three broadest causes of mass rape: political, economic, and sociocultural, in terms of structural violence. Each cause is analyzed with rape theory framework, beginning with the general logic and incentive behind mass rape and then compared against the Congo. While each structural cause has strong points, each are unsatisfactory independently. Thus, I conclude that an integrated approach considering all three causes of excess mass rape in the DRC is the best way to analyze and attempt to solve the instability of the state in terms of sexual violence.