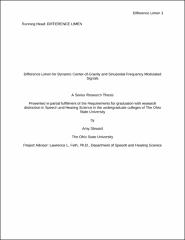 The overarching goal of this experiment was to better understand how the human central auditory system processes complex sounds. Specifically, we hypothesized that the processing of the dynamic spectral center-of-gravity (COG) of a pair of amplitude modulated (AM) tones was similar to the processing of a single tone that was sinusoidally frequency modulated (FM). The center-of-gravity effect refers to the listener’s ability to track an amplitude-weighted average frequency between two tones differing in frequency by more than an octave. To create a dynamic COG, the two tones were amplitude modulated at the same modulation rate with modulators separated by a phase difference. For five normal-hearing human listeners, we used a discrimination task to determine the smallest difference in the extent of modulation that a listener can just detect. This difference, called the difference limen (DL), is thought to reflect central auditory processing. We determined these DLs across a range of center frequencies, modulation frequencies, and deviations for both FM and COG signals. We then compared the DLs of each COG signal to the DL of its *matching FM signal (*same center frequency, modulation frequency, and frequency deviation). We did not expect the DLs to be the same for FM and COG signals, but we did expect them to behave similarly as we altered their center frequencies, modulation frequencies, and frequency deviations. Analysis revealed that, even though the COG DLs were greater than the FM DLs, they generally behaved in the same way. The implication of this relationship is that it points to a physiological mechanism in the central auditory system that is able to integrate multiple sound components across a range of peripheral auditory filters.