Ohio State Route 56 and Other Stories 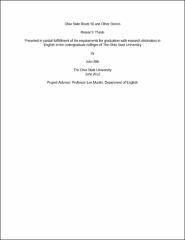 Ohio State Route 56 and Other Stories In a 1996 article published in the journal Family Relations, The Rural and Appalachian Youth and Families Consortium describes the region of the United States known as Appalachia as follows: Although the term Appalachian is often used to indicate culture, Appalachia also is a geographic region and a political construction as defined in 1965 by the United States Congress…[and] includes all of West Virginia and parts of 12 other states that stretch contiguously from New York to Mississippi. (pg. 389) The portion of Ohio termed Appalachia by the United States Congress in 1965 includes thirty-two counties either along or within a few hours driving distance of the Ohio River. This accounts for approximately a third of Ohio’s total eighty-eight counties. Marietta, founded as Ohio’s first permanent settlement in 1783, is located well within the “geographic” boundaries of this region, in Washington County. Ohio, in a sense, began in Appalachia. If you drive into Marietta along state route seven, you will encounter sculpted cliffs that jut out to the roadside and signs that warn drivers of rock slides. The Ohio River’s muddy waters are a hotspot for locals and visitors who enjoy all varieties of water sports, including jet skiing, wakeboarding, and fishing. My mother was raised in Marietta and, as children, my brothers and I visited our grandparents two or three times per year and would hear stories of deer sightings in their backyard and once even the tale of a black bear who wandered onto their property from the woods after dark. According to almost any professor of creative writing, a tenet of literary fiction is that well-crafted stories are character-based, instead of plot-based. James Joyce’s Dubliners is not called Dublin, because Joyce’s ambition to depict the psyches of the characters who populate Dublin overshadows his ambition to depict the city of Dublin itself. Similarly, my ambition in this thesis project will be not simply to depict Appalachia but to depict the psychological climate that characterizes Appalachia and the cultural features that give the region its unique “thumbprint” in the twenty-first century. Such features include: its economic transformation (or, in places, its lack thereof) since the mid-sixties; its resistance to ethnic diversity; and its inhabitants’ use of the Ohio River for recreational purposes. Although some of the stories in this collection will not be set in southeastern Ohio cities and towns such as Marietta, Gallipolis, and Beverly, all of them will be centered on characters who inhabit Appalachia at least on a psychological level. My ambition in Ohio State Route 56 and Other Stories is to show people whose life experiences lead them to adopt an Appalachia state of mind. Works Cited The Rural and Appalachian Youth and Families Consortium. “Parenting Practices and Interventions among Marginalized Families in Appalachia: Building on Family Strengths.” Family Relations: Interdisciplinary Journal of Applied Family Studies.