Maternal Gatekeeping: Do They See It The Way We Do? 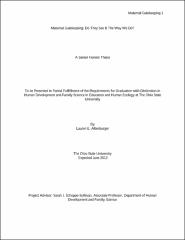 The New Parents Project is supported by the NSF (CAREER 0746548 to Schoppe-Sullivan), NICHD (K01HD056238 to Kamp Dush), Ohio State University’s Initiative in Population Research, also supported by NICHD (R24-HD058484), and the Department of Human Development and Family Science. Portions of this paper were presented at the 2011 Society for Research in Child Development annual meeting in Montréal, Canada.
Funding was also provided from the University Honors and Scholars Center and the College of Education and Human Ecology in the form of a Full Undergraduate Research Scholarship.
Funding was also provided in the form of a Summer Research Scholarship from the University Honors and Scholars Center.