Three Paths to One State: Polish National Identity under Russian, Prussian, and Austro-Hungarian Occupation after 1863 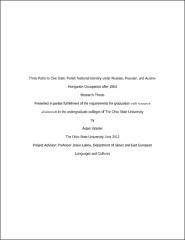 The purpose of this thesis is to carry out a comparative study of the three partitioned areas of Poland between roughly 1863 and the outbreak of World War I. Specifically, the thesis compares the effects of the three Imperial powers on the economic landscape of each region, as well as the environment in which Polish political thought, specifically different forms of Polish nationalism, emerged, analyzing how that environment help contribute to its development. I will primarily, but not entirely, use secondary sources and literature for the bases of my research. The period between 1863 and 1914 was a critical point in the development of the national philosophies and identities that would eventually emerge in force during the inter-war period. Each partitioned area was able to provide a vital piece in what would eventually emerge. The Polish middle and upper classes were able to capitalize upon all of these experiences and develop a comprehensive sense of national identity. Each region contributed to this in some way, whether it was the building of and ethnically-defined national character in the German partition, the preservation of Polish culture and identity within the Russian partition, or--possibly the most important factor in terms of forging a national identity--the politically free atmosphere of Galicia which provided the Polish elites with a political forum to express and propagate its newly formed ideals. Future areas of scholarship could focus on the lingering distinctions of how Polish identity is constructed in these three regions or the eventual disappearance of these distinctions. Other scholarship could detail the legacy of Dmowski and Piłsudski’s ideologies and the impact they had on inter-war Poland and post-Soviet Poland. Finally, one could trace the specificity of the nationalist attitudes described above, and how they are still present today in Polish politics.