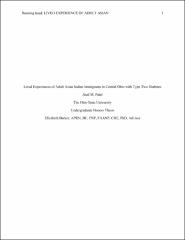 Research shows that prevalence of Type Two Diabetes Mellitus in Asian Indians is the highest amongst various ethnicities. The purpose of this study was to gain an in-depth understanding of the lived experiences of adult Asian Indian immigrants living in central Ohio who have Type Two Diabetes. The perceptions of this ethnic subgroup were studied through formal interviews with nine participants, the sample size. Data saturation, when no new themes were emerging from data, had been reached with the ninth participant. Interviews were audio taped and later transcribed and translated for analysis. Interview transcripts were coded and analyzed for themes. Follow-up interviews were conducted for four participants to further clarify and verify points of interest in data. To summarize, two major themes were observed in the data: A majority of the study participants experienced transitions or changes in their lives due to Diabetes. Also, they had to control their diet to manage Diabetes. Amongst these themes, participants’ stated the importance of restricting diet, exercising more, taking medication. They also stated feeling tiredness, pain, or less energy than before. Furthermore, the participants experienced various other feelings associated with lifestyle changes such as feeling good with more exercise or feeling like they did not have enough time to exercise in some cases. Overall, the participants expressed many thoughts and feelings regarding their lived experiences with Diabetes. This can help health care professionals better understand the perceptions of an ethnic group that is greatly affected by Diabetes. By better understanding the perceptions and lived experiences, the provider is able to design more efficient culturally competent interventions that can help lead to better health outcomes for this ethnic group.