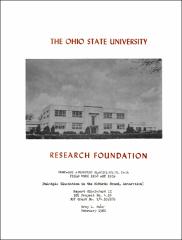 At least four major Quaternary glaciations, each successively less extensive than the former, are recorded in the McMurdo Sound region of Antarctica. Deposits of the earliest recognized glacial advance occur high on ridges and flat areas. The deposits are 2,000 feet above the valley floor, are badly weathered, and have little or no morainal form. Ice of this glaciation filled all the valleys and must have filled McMurdo Sound to an elevation of 2,000 feet. Deposits of the next two succeeding glaciations are distributed around the Sound as well-preserved but considerably subdued moraines of both outlet and alpine glaciers. During the earlier of these two glaciations, alpine glaciers reached the expanded Koettlitz and Ferrar outlet glaciers. Outlet glaciers filled the southern part of McMurdo Sound to an elevation of about 1,000 feet. During the latter of these two advances many alpine glaciers did not reach the outlet glaciers. The latest major glaciation is represented by well-preserved ice-cored moraines. Number and position of deltas in drained glacier-ice-blocked lakes suggest possible three stillstands or minor advances during this glaciation. Radiocarbon dating of algae in drained ponds indicates a minimum age of 6,000 years for this glaciation.

Submitted to the U.S. National Committee for the IGY, National Academy of Sciences, in partial fulfillment of IGY Project Number 4.10 - NSF Grant No. Y/4.10/285.