Identification of Factors Involved in Cell Integrity of Gram-negative Bacteria 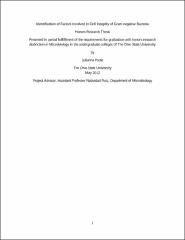 The cell envelope of Escherichia coli and other Gram-negative bacteria is composed of an outer membrane and an inner membrane. Between the two membranes lies the aqueous periplasm which contains a layer of peptidoglycan. To maintain cell integrity, the synthesis and maintenance of the cell envelope must be carefully regulated. In order to identify factors involved in these processes, we developed a screen that identifies mutants with increased lysis (ilm mutants) among a population of transposon mutants. ilm mutants lyse more frequently than wild type because an aspect of their cellular integrity has been compromised. Our screen relies on the visualization of the release of cytoplasmic contents from colonies into the surrounding medium using a colorimetric reporter. Once these mutants are identified, the site of the transposon insertion can be determined, and the nature of the insertion and how it compromises cell integrity can be elucidated. Using our screen, we identified thirteen proteins important in maintaining cell integrity in E. coli. Twelve of these proteins have been characterized previously, while one protein, YciB, has not yet been characterized. Additional research is needed to fully understand the function of YciB in the maintenance of envelope integrity.