Comparative Toxicity of Cryoprotectants on Staphylococcus aureus at Room Temperature 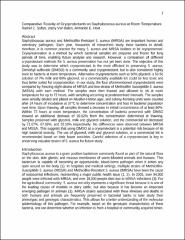 Staphylococcus aureus and Methicillin-Resistant S. aureus (MRSA) are important human and veterinary pathogens. Each year, thousands of researchers study these bacteria in detail; therefore, it is common practice for many S. aureus and MRSA isolates to be cryopreserved. Cryopreservation is a method by which bacterial samples are prepared and frozen for long periods of time, enabling future analysis and research. However, a comparison of different cryoprotectant methods for S. aureus preservation has not yet been done. The objective of this study was to determine which cryoprotectant is the most efficient in preserving S. aureus. Dimethyl sulfoxide (DMSO) is a commonly used cryoprotectant, but is also considered highly toxic to bacteria at room temperature. Alternative cryoprotectants such as 60% glycerol, a 50:50 solution of 7% milk and 60% glycerol, or a commercially available kit could be less toxic and thus better suited for cryoprotection. In our study, the four aforementioned cryoprotectants were compared by freezing eight strains of MRSA and two strains of Methicillin Susceptible S. aureus (MSSA) with each method. The samples were then thawed and allowed to sit at room temperature for up to 72 hours, with sampling occurring at predetermined intervals. The samples were serially diluted and plated on Mueller-Hinton agar, and colony-forming units were counted after 24 hours of incubation at 37°C to determine concentration and loss in bacterial population over time. Upon thawing, all samples showed a decrease in initial concentration of at least 80%. Within 72 hours at room temperature, the concentration of bacteria preserved with DMSO showed an additional decrease of 99.52% from the concentration determined at thawing. Samples preserved with glycerol, milk and glycerol solution, and the commercial kit decreased by 71.67%, 67.69%, and 35.10% respectively. No differences were observed between MRSA and MSSA. This suggests that using DMSO as a cryoprotectant is a potential risk because of its high bacterial toxicity. The use of glycerol, milk and glycerol solution, or a commercial kit is recommended based on their lower toxicities. Careful selection of a cryoprotectant is key to preserving valuable strains of S. aureus for future study.