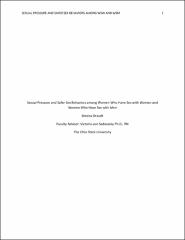 Purpose: Women who experience sexual pressure are less likely to use condoms and other safer sexual behaviors despite having knowledge of or intentions to do so (Fair & Vanyur, 2011). This may be one reason women disproportionately contract sexually transmitted infections (STIs; CDC, 2010). What is not known is if sexual pressure and safer sexual behaviors differ between women who have sex with women (WSW) and women who have sex with men (WSM). The purpose of this study is to explore the relationship between sexual pressure and safer sex behaviors among these women. Method: This exploratory study is a secondary analysis of a larger study examining the psychometric properties of a new instrument assessing sexual risk. Sample: Women (N = 349; 18 – 32 yrs.) participated. Procedure: After IRB approval, all undergraduate women attending OSU were sent an advertisement for the parent study. Interested women contacted the PI and were sent information and a link to register for the study. On the study site women answered questions about their eligibility, completed an electronic informed consent, and responded to a series of questionnaires assessing their sexual risk and demographic information. Women, 2-weeks later, were invited back to complete the questionnaires for test-retest reliability for the parent study with a 98% return rate. For this analysis, the relationship between three single-item questions regarding perceived pressure to engage in sexual activity and a composite score of safer sex behaviors (DiIorio’s Safer Sex Behavior Questionnaire) will be analyzed from the initial data. Difference by sub-group (WSM and WSW) of the major study variables of sexual pressure and safer sex will also be examined. Results: Moderate levels of sexual pressure and safer sex behaviors were experienced in both groups. WSW and WSM had no significant differences in levels of safer sex behaviors. The only difference in sexual pressure was having sex before ready; WSW were significantly more likely to do so. In general, sexual pressure variables related to each other and are negatively associated with safer sex behaviors. Conclusions: More research is required to better understand the sexual behaviors of WSW to tailor interventions for this population. Practitioners need to be aware of that both groups need interventions to counteract sexual pressure. Development and testing of interventions that focus on assertive communication skills are needed to empower women in sexual health decision-making.