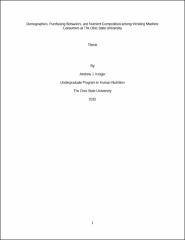 The United States has seen a rapid increase in the rate of obesity over the last three decades and snacking may have contributed to this epidemic. The frequency and prevalence of snacking, the numbers of snacks consumed per day, and the energy density of snack foods have all increased in recent years. Vending machines are common avenues for distributing snack foods. Little is known about consumers who purchase snack food items from vending machines, particularly on college campuses. The objectives of this study were to: 1) Determine if vending consumers who select green, yellow, or red items differ significantly in their demographic (gender, age, building location) and purchasing behaviors (frequency, motivation); 2) Determine if differences exist between average consumed nutrients from vended food products (calories, vitamin A, vitamin C, dietary fiber, calcium, potassium, protein, fat, saturated fat, trans fat, sugar, sodium) for green, yellow, and red consumers. A cross-sectional survey of vending consumers at 18 preselected campus vending machines was completed, and subsequent statistical analyses were performed to determine the differences among consumers. The type of building and age of the consumer were associated with the type of item (green, yellow, red) selected. Green items were selected significantly more (p<0.001) at the Recreation and Physical Activity Center (RPAC) than at classroom buildings, the medical center, office buildings, and residence halls. For all ages, (18-24, 25-34, 35-44, 45-54, and 55+), red items were chosen significantly more often than green or yellow items (p <0.015). Also, significant differences were found among the average nutrients consumed by green, yellow, and red consumers. Those consuming red items consumed significantly more calories, fat, saturated fat, and sugar (p <0.0001), than those consuming green items. Those consuming green items consumed significantly more vitamin A, vitamin C, dietary fiber, calcium, potassium, and protein (p <0.0001), than those consuming red items. Data such as this can be useful in determining target groups for strategies aimed at decreasing the quantity and improving the quality of snack food choices of vending consumers.