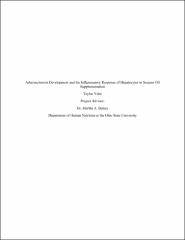 Atherosclerosis is one of the leading causes of death. Preventing atherosclerosis starts with controlling the build-up of plaque in the arteries. Due to the current obesity epidemic, preventing atherosclerosis through the diet is increasingly important. The types of dietary fats consumed may lead to changes in plaque content and reduce risk for plaques to form lesions that stick to the arterial wall. Dietary sesame oil reduces arteriosclerotic plaque formation in mice prone to developing atherosclerosis. Because the liver is the major site for cholesterol metabolism and therefore, contributes to atherosclerotic disease in this way, we hypothesize a sesame oil diet would reduce inflammation in the livers of mice. Using the LDLr -/- mouse, which is prone to atherosclerosis, we measured mRNA for several genes coding for inflammation and infiltration of macrophages (e.g., IL-6, TNFα, TNFα receptor, and F4/80) in the liver. In contrast to our hypothesis, markers of inflammation appear to be elevated in mice fed sesame oil. We suspect the elevation of the inflammation markers measured was an indirect effect of dietary sesame oil inducing lipid accumulation in the liver. In order to test the causative effect of sesame oil on lipid accumulation and inflammation, we will quantify the fat content (triglyceride, diglyceride and monoglyceride) in the liver of mice fed the sesame oil. Once we have a better assessment of dietary induced changes of the liver lipid composition, we will know more about why livers are exhibiting enhanced markers of inflammation in mice fed sesame oil diets.