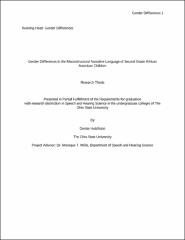 There is evidence that a racial and ethnic gap in achievement exists in the US. Recently, a gender achievement gap has begun to gain increased attention. The gender gap is more pronounced in African American and Hispanic American populations than in other racial and ethnic groups. Males tend to achieve poorer academic outcomes than females across academic domains. This descriptive study focuses on narrative ability differences between second-grade African American females (n = 8) and males (n = 5). Students generated a spoken narrative from the wordless picture book, Frog, Where Are You? Narrative ability was assessed using the Narrative Scoring Scheme which measures the quality of narrative macrostructure—the hierarchical organization of the narrative. The NSS measures the extent to which each of the following macrostructural components is produced in the narrative: Introduction, Character Development, Mental States, Referencing, Conflict/Resolution, Cohesion, and Conclusion. Results revealed no group differences in macrostructural narrative language ability. These findings indicate that narration may be an area of linguistic strength for African American males.

College of Arts and Sciences
Department of Social and Behavioral Sciences