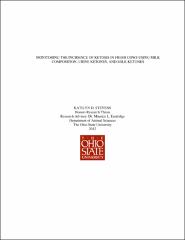 Fresh cows have a high risk for ketosis within the first 30 DIM due to low DM intake and the rapid mobilization of fat after parturition. Early detection of ketosis, including subclinical ketosis, can allow for earlier intervention and minimize the loss of milk production. A 700-cow Holstein farm in Ohio was used for collecting samples at 7 and 14 DIM (n=204 cows). Composite milk samples and right-front (RF) quarter strip samples were collected. Both samples were analyzed for milk components at the farm using a LactiCheck (LIC). Composite milk samples were also sent to DHI Cooperative, Inc. for analysis of milk components. Keto-Test strips were used to measure ketones (β-hydroxybutyrate) in milk stripped from the RF quarter, and urine ketones (acetoacetate) were measured with KetoStix. The average fat concentration from LIC composite samples was 5.36 + 2.05% and 5.15 + 1.90% from DHI, with the RF strippings having a lower milk fat (3.17 + 1.88%). Average milk ketone concentration was 0.55 + 0.98 mg/dl, and urine ketone concentration was 4.41 + 15.4 mg/dl; however, the incidence of clinical ketosis was relatively low in the herd (3.4% based on urine ketones > 40 mg/dl or 6.9% based on milk ketones > 2.0 mg/dl). The correlation coefficient for LIC and DHI composites was 0.70 (P < 0.0001), and the correlations between the composites and the RF samples were similar for both methods of analysis (r=0.30; P < 0.0001). The correlation of the RF milk fat percentage and the milk and urine ketones also was similar (r=0.22; P < 0.001). The changes in milk fat concentrations from 7 to 14 DIM were similar for LIC and DHI composites and the RF samples (-0.63, -0.88, and -0.77, respectively). Monitoring milk fat concentration of individual cows holds promise for the diagnosis of ketosis.