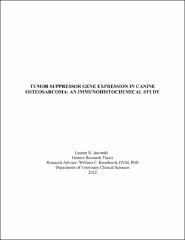 Osteosarcoma (OSA) is the most common primary bone tumor in both dogs and people. Spontaneous OSA in the dog is an excellent large animal model for the human disease as it occurs in the canine population with a higher frequency (over 10,000 cases per year) compared to humans (1,000 cases per year). The pathobiological, clinical, and molecular characteristics in humans and dogs are quite similar. As in people, OSA in dogs is an invasive rapidly growing cancer with a high metastatic potential, primarily to lung and bone. In this study, we characterize PTEN ,p16, Rb and p53 protein expression in canine OSA using tissue microarrays (TMAs) and immunohistochemistry. Tumor expression was interpreted semi-quantitatively by intensity of cytoplasmic and nuclear immunoreactivity and were scored as negative (score 0), weak (score 1), moderate (score 2), and intense (score 3). As the intensity of reactivity was heterogeneous and the distribution of reactivity variable in each sample, if >10% of total neoplastic cells were stained with any intensity, the sample was considered positive. Positive immunohistochemical staining of PTEN, p16, Rb and p53 was 62.6%, 67.1%, 68.5%, and 82.8%, respectively. The predominant staining pattern for PTEN, Rb, and p53 was cytoplasmic and nuclear, while the predominant staining pattern for p16 was primarily cytoplasmic. The study of immunohistochemical expression of tumor suppressor genes in canine OSA suggests that loss of function mutations commonly occur in spontaneous disease.