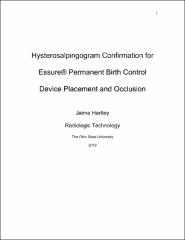 The Essure® hysteroscopic sterilization system is a minimally invasive technique that involves the placement of micro-inserts into the fallopian tubes. These micro-inserts contain polyethylene terephthalate (PET) fibers, which cause a benign inflammatory response, occlude the fallopian tubes, and cause permanent sterilization. The United States Food and Drug Administration (FDA) requires that the patient undergo follow-up hysterosalpingography three months after device placement to prove device retention, determine the location of the inserts, and ensure tubal occlusion. Many imaging professionals are not properly educated on the procedures and images required in the manufacturer recommended follow-up hysterosalpingography protocol. In this study, data from these examinations at a large, mid-west university hospital were analyzed, and descriptive statistics about the frequency of images obtained and complications noted in the radiologist’s reports are presented. The data was also evaluated for trends relating to the technical quality of the images. Of 428 images obtained in 130 sample exams, 74 exams included a preliminary scout image, 55 exams included a minimal fill image, 88 exams included a partial fill image, 119 exams included a total fill image, 46 exams included a right magnification image, and 46 exams included a left magnification Seventy percent of the cases included 2,3, or 4 images, and about 12% of cases only included one image for the radiologist to evaluate. However, only 9 reports contained mentions of limitations in diagnosis due to the number or quality of the images provided for interpretation. Twenty-two percent of the cases included fundal images of the uterus. Parts of the reproductive anatomy including the vagina, uterus, and cervix were clipped off in 28% of the cases, and in a further 18%, the gynecologist failed to remove the speculum prior to exposure, resulting in incomplete visualization of reproductive anatomy. In 9% of the exams, one of more of the images was considered blurry during this secondary analysis. The most frequent technical error committed during these exams was failure to use a lead marker to denote anatomic side; 52% of cases were not marked with a lead marker.