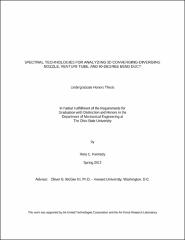 Computational fluid dynamics (CFD) is used to provide detailed predictions of complex fluid flows. CFD enables scientists and engineers to perform numerical experiments or computer simulations in a virtual flow laboratory. This study focuses on CFD for predicting the performance map of various Turbomachinery and nozzle configurations. The performance map can be characterized as the pressure ratio and efficiency of aircraft engines. Since small improvements in engine efficiency can lead to huge savings in fuel costs for a fleet of commercial aircraft, scientists and engineers are very interested in CFD tools that can give accurate quantitative predictions of engine performance maps without the need to run as many costly full scale wind tunnel tests. A three-dimensional (3D) spectral procedure has been developed to predict the flow solutions for the various nozzle configurations. The flow predictions have been charted against the evidence of well-established test data previously obtained in the literature. A spectral analysis procedure was formulated to reduce the governing coupled nonlinear parabolic partial differential equations to associated coupled nonlinear algebraic equations for the unsteady viscous compressible flow inside the geometry configurations. No conventional ordinary differential equations and associated time-marching techniques linked with finite element, volume, or differencing methodologies were needed. Favorable agreement is shown between the present 3D spectral method predictions and previously published 3D finite volume predictions of the transonic flow. The phenomenology of 3D spectral calculated secondary flow in the nozzles were traced and compared to that previously published in the literature. The favorable results obtained from the study shows clear evidence that the 3D spectral procedure developed can be an important tool in analyzing aircraft engines to improve performance efficiencies.