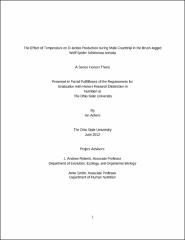 Wolf spiders (Lycosidae), like all spiders, are ectothermic, meaning that their body temperature is similar to the temperature of the surrounding environment. This puts added constraints on their ability to perform both aerobically and anaerobically. Thus, temperature directly affects behavioral vigor (performance) which is tied to reproductive success in wolf spiders. It stands to reason that individuals with greater performance capacity (higher respiration limits), regardless of temperature, should achieve greater mating success. In this experiment we will be analyzing the production of D-lactate (a byproduct of anaerobic metabolism in wolf spiders) in tissues of the brush-legged wolf spider, Schizocosa ocreata. Males of this species actively seek and court females in the leaf litter habitat of eastern deciduous forests during the spring breeding season. Males are regularly exposed to thermal variation (sun/shade) as they move through the litter and it has been suggested that they are behaviorally maintaining body temperature above ambient, which would increase behavioral vigor and potentially increase mating opportunities. The objective will be to establish D-lactate production levels (minimum and maximum) for males at predetermined substrate temperatures that represent the seasonally appropriate thermal minimum, mean, and maximum in the natural habitat. The resulting estimates of optimum anaerobic performance temperature will confirm that there is variance among males in anaerobic performance, and further, will allow us to better predict what thermal sites males should pick to optimize courtship. Ultimately, we will be able to explore whether the anaerobic capacity of preferred males is higher than less preferred males, in this as of yet unexplored aspect of sexual selection in this well-studied animal model.

The College of Education and Human Ecology through the Undergraduate Research Scholarship
Office of the Research Coordinator, Ohio State Newark