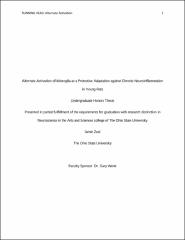 Alzheimer’s disease (AD) and other age related neurodegenerative diseases share a chronic neuroinflammation component in different areas of the brain. The sustained presence of neuroinflammation is harmful due to the prolonged release of toxic cytokines by activated microglia, which results in damage to the body’s own cells. To model chronic neuroinflammation, a cannula delivered lipopolysaccharide (LPS) into the fourth ventricle of three month old rats for periods of two, four, and eight weeks. Following two and four weeks infusion, the rats showed impaired spatial memory performance on the Morris Water Maze task compared to the control group receiving artificial cerebrospinal fluid. However, after eight weeks of LPS administration, young rats exhibited a compensatory adaptation, which returned spatial memory performance to that of the control group. It was hypothesized that the microglia in the young brain had shifted from the classical M1 phase associated with damaging defense to the alternative M2a activation associated with repair. The correlation of Morris Water Maze performance and immunohistochemical analysis of Major Histocompatability Complex II and Peroxisome Proliferator-Activated Receptor gamma expression failed to support this hypothesis. Further understanding the underlying less destructive path will provide possible targets for intervention in AD, as inducing these adaptations may prevent further damage.