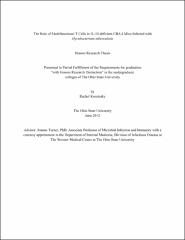 Most humans infected with Mycobacterium tuberculosis (M.tb) can exhibit asymptomatic control of the infection however, 10% of humans can reactivate infection to develop contagious tuberculosis (TB). IL-10 is an immunosuppressive cytokine that has been hypothesized to play a role in the reactivation of M.tb infection. Previous studies have shown that CBA/J IL10 knockout mice can better control M.tb infection compared to wild type CBA/J mice. This has been noted by a measured decrease in the pulmonary bacterial load throughout infection, an increase in survival compared to M.tb-infected CBA/J mice, and enhanced early TH1 mediated immune responses. Multifunctional CD4+ T cells, T cells that produce IFN-γ, TNF-α, and IL-2, have recently been linked to control of M.tb infection. The goal of this project was to analyze multifunctional T cells in the CBA/J mouse strain, a strain that is naturally susceptible to M.tb, as well as in CBA/J IL-10 knockout mice. The mediastinal lymph node of CBA/J mice and CBA/J IL10 knockout mice was analyzed early in infection for the presence of multifunctional CD4+ T cells. Our hypothesis was the IL-10 knockout mice would show higher numbers of T cells as well as more T cells with the ability to produce multiple pro-inflammatory cytokines at early time points in infection. It was found that the CBA/J IL10 knockout mice possessed more CD4+ T cells with the ability to produce one, two, or three of the protective cytokines. Therefore, the presence of multifunctional CD4 T cells may be linked with improved control of M.tb infection, a finding that could lead to further therapeutic development.