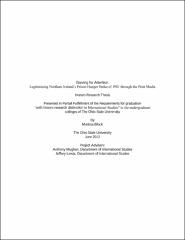 In 1981, ten men starved themselves to death in Northern Ireland’s Maze prison to prove to the world and their government that they were not common criminals. These men were part of Republican paramilitary organizations that had plagued the land with violence for over a decade as they attempted to rid Northern Ireland of the British government’s rule. They sought to be recognized by the government as special category prisoners, thereby affirming that their offenses were of political rather than criminal nature. To legitimize their cause and actions, they chose to embark on a hunger strike to the death in the hopes of amassing enough support and acknowledgement from the public as to pressure the government into conceding their demands. However, the hunger strike ended prematurely and they were unable to achieve the support necessary for their political demands to be met. In this study, I explore the strike from the perspective of the public by analyzing its related coverage in newspapers based in Belfast and Dublin, the capitals of Northern Ireland and the Republic of Ireland respectively. In order to understand why the Republican prisoners were unsuccessful in gaining the public’s support, I sought to categorize the essential components of legitimacy for the prisoners and analyze how these components were affected through media interpretation. The compiled data demonstrate that the strike did not amass the support it had sought nor were the components of legitimacy upheld through its coverage in the papers. Ultimately this shows the potential power that the media may have to influence the public’s perception of paramilitary organizations. Because of this, this research provides an important framework for combating the future emergence of support for organizations of violence.