How Far Did Wii Run? 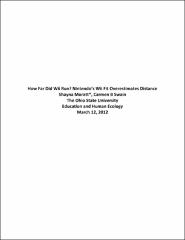 ‘Exergaming’ (performing exercise utilizing an interactive video game) has become a popular form of physical activity. Some exergames are specifically aimed at improving or maintaining physical fitness. Yet, there is little information available to describe the accuracy of feedback given to participants. PURPOSE: To examine the reported run distance and exercise intensity elicited by the Wii Fit aerobic free run. METHODS: 500 participants ages 10-49 completed the WiiFit aerobic free run. Oxygen consumption (VO2) was measured. Relative oxygen consumption values were used to determine estimated run distance based upon American College of Sports Medicine (ACSM) metabolic equations. Subjects rated perceived exertion using Borg’s scale at a period of every 5 minutes. RESULTS: The WiiFit overestimated the distance of the aerobic free run by a percentage difference of 49.9 ± 15.7 percent. The average VO2 during the free run was 22.3 ± 5.8 ml/kg/min or 6.4 ± 1.7 METs, which is considered vigorous intensity by ACSM standards. The mean RPE recorded was 12.43 ± 2.46. CONCLUSIONS: The Wii Fit displays an over-estimated figure for distance when performing the aerobic free run. However, the general level of intensity in this sizeable population shows promise as a method of exercise appropriate to improve or maintain fitness in various populations.