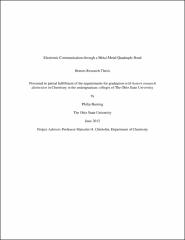 Mixed valence compounds are incredibly useful tools for studying electron transfer. Most inorganic mixed valence compounds are of the form [M-B-M]+, where M is a metal-based redox center and B is a chemical bridge (usually an organic ligand). Herein, we describe the synthesis and characterization of inorganic mixed valence compounds of the form [L-M-L]-, where L is a ligand based redox center and electronic communication is facilitated through the metal center. The compounds are of the form M2(TiPB)2(nic-B(C6F5)3)2, where TiPB = 2,4,6-triisopropylbenzoate, nic = 4-isonicotinate, and M = Mo (1B) or W (2B). The electronic structures of 1B and 2B (and their parent compounds) are examined using electronic structure calculations and UV-vis spectroscopy. The characterization of the anions 1B- and 2B- allows us to assess the ability of the M2 bridge to facilitate electron transfer between the two redox sites. The separation of reduction peaks in cyclic voltammetry (ΔE1/2 = 300 mV (1B) and 650 mV (2B)) suggests, as expected, that the tungsten center is better at coupling the redox centers. Additionally, the absorption peaks and band shapes associated with charge resonance (or IVCT) in the NIR (1B- = 3800 cm-1; 2B- = 4500 cm-1) allow us to assign 1B and 2B to Class II/III and Class III mixed valence ions, respectively; while both compounds have fully delocalized charge, the coupling is larger for the tungsten compound.