Phenomenology and the Cinema of Jean-Luc Godard 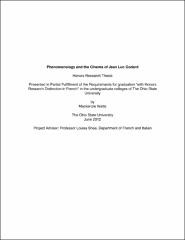 Many scholars have studied philosophy as it relates to the work of French New Wave director Jean-Luc Godard. Godard was a contemporary of the French existential and phenomenological philosophers, and several critics have noted that these philosophers influenced his work. However, there is no real substantive inquiry into connections between Godard and Maurice Merleau-Ponty, the most celebrated French phenomenologist of the era. This lack of attention to Godard in the study of phenomenology is a serious omission in the field, as Godard is one of the most interesting filmmakers in respect to a philosophical study, and it is clear that meaningful ties between the two can be distinguished. The purpose of my research is to fill this current gap by illustrating the influence of Merleau-Ponty on the work of Godard, notably in his films Vivre sa vie (1962) and 2 ou 3 choses que je sais d’elle (1967). Using Merleau-Ponty’s seminal work Phenomenology of Perception (1945), I explore in what ways the themes presented by Merleau-Ponty are used by Godard in his cinema. This involves a close examination of his film style and techniques, as well as scenes analyses of the previously mentioned films. It is evident that Godard was influenced by Merleau-Ponty’s philosophy, particularly in the realm of sexuality and the capitalist society as they relate to an objective and subjective existence. Using the films mentioned above, as well as the biography of Godard Everything is Cinema (Brody, Richard) and scholarly articles on both Godard and phenomenology by scholars, I demonstrate that the relation between the works of Merleau-Ponty and Godard are apparent and provide a much needed addition to the field, as these connections are not yet adequately explored.