Was Minnie's Cream Jar Made in Roseville? 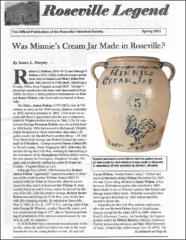 A large loop-handled stoneware jar decorated with a rooster cobalt stencil and script "Minnie's Cream Jar," signed by Robert Fulton is described and an attempt made to identify "Minnie." Fulton manufactured stoneware in the latter part of the 19th C. in Muskingum and Guernsey Co., Ohio, and was the brother of the better known potter, Geroge N. Fulton (1834-1894).