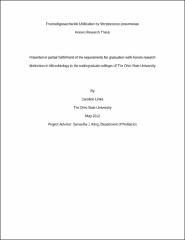 Streptococcus pneumoniae (pneumococcus), a leading cause of morbidity and mortality worldwide, commonly colonizes the oronasopharynx asymptomatically but can on occasion progress beyond this site and cause disease. Pneumococcal colonization is a necessary precursor to disease and is dependent upon the ability of pneumococci to acquire and utilize carbohydrates. There are two main types of carbohydrate transporters encoded in the pneumococcal genome: the Phosphotranferase Systems (PTS) and the ATP-Binding Cassette (ABC) transporters. There are two proposed sucrose transporters encoded within the pneumococcus genome, a PTS, ScrT, and an ABC transporter, SusT1T2X. As ABC transporters are less energetically favorable than the PTS and are predicted to be subjected to catabolite repression, we hypothesize the main substrate of the SusT1T2X is not sucrose. The presence of a gene encoding sucrose hydrolase in the same genomic locus as susT1T2X led us to believe the main substrate of this transporter is sucrose-containing. Inulin is a fructooligosaccharide (FOS) consisting of a long chain of fructose molecules with a terminal sucrose. Inulin is fermented by approximately 60% of pneumococcal strains yet the mechanism of utilization remained unknown. We have shown both inulin and shorter chains of FOS can support growth of the pneumococcal strain TIGR4 as a sole carbon source. An unmarked, nonpolar deletion of susT1T2X was created. This strain, TIGR4 ΔsusT1T2X, was unable to utilize FOS longer than a glucose linked to three fructose. A genetically reconstituted strain was able to restore growth on these FOS indicating the sus locus is required for import of FOS. Furthermore, it has previously been reported that pneumococcal strains encode one of two distinct ABC transporters at the sus locus. Data suggest that while both transporters encoded at the sus locus allow for the import of short chain FOS, only one of the transporters allow for the import of long chain FOS, or inulin.