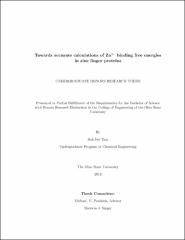 Zinc fingers are Zn2+-bound peptide motifs that bind DNA specifically and have great potential in gene therapy. However, the ion binding strength of the zinc finger is not well known, and computing this quantity will allow for the design of more stable zinc finger treatments. Ions in solution are a model system. Molecular dynamics (MD) simulations and the inverse potential distribution theorem were used to estimate the solvation free energies of zinc ions. The zinc coordination shells were stable and the initial coordination shell stayed throughout the 20 ns simulations. Quasi-chemical (QC) calculations are free energy calculations that partition the system into an inner shell, treated using quantum mechanics, and an outer shell, treated using continuum electrostatics. The theory was extended to multiple ligands in solution and used on Zn2+ in water/methanol mixtures, with the inner shell consisting of the six solvent molecules coordinated to the ion and the outer shell consisting of all other solvent. Increasing methanol coordinated to the zinc led to lower inner shell formation free energies but higher outer shell free solvation energies. A six-water coordination shell was found to be most stable. Using quasi-chemical theory with different concentrations in the outer shell did not yield major differences, but this could have been due to an insufficient treatment of the van der Waals forces. A quasi-chemical approximation using MD to treat the outer shell would fix such problems and will be useful in computing zinc finger ion binding free energies.