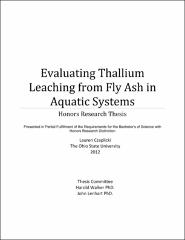 To develop a fundamental understanding of how water chemistry and the physical and chemical properties of fly ash influence the release of thallium in natural and engineered aquatic systems I used leaching tests, graphite furnace atomic absorption spectroscopy, and the synchrotron generated x-rays of very high energy at Argonne National Laboratory. I evaluated and characterized the leaching of thallium as a function of pH, liquid to solids ratio (L:S), and ash origin. To complement the leaching data, specific molecular-level details describing thallium with speciation in fly ash acquired from various coal combustion power plants were collected via x-ray absorption spectroscopy (XAS). This work gives information on the intrinsic leaching behavior of different ashes. This has the potential to be used to project long term cumulative release of Tl from fly ashes under various management scenarios. The determination of the exact speciation of Tl in fly ash will help to explain and predict the leaching behavior of thallium in fly ash ponds and other aquatic systems in the built and natural environments. Results from leaching tests in which the effect of varying liquid to solid ratios on leaching behavior is examined indicate as the L:S increased, the amount of thallium leached logarithmically decreased. This suggests a more complex leaching mechanism than dilution is at play, as an isolated dilution process would result in a linearly decreasing variance. These results suggest the existence of multiple species of thallium, of varying accessibility and solubility, but literature examining this possibility in fly ash is scarce. XAS analysis showed multiple species of thallium present in each ash. This knowledge of the specific thallium speciation in fly ash within aquatic systems is extremely valuable. Specific information derived from XANES helps to evaluate whether Tl speciation and leaching is dependent on pH conditions, L:S ratio, and source coal.