The Nature of the Isosurface Fractal Dimension 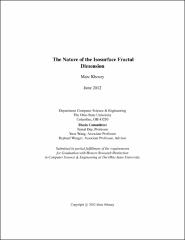