Design and Fabrication of an Active Membrane Desalination Module 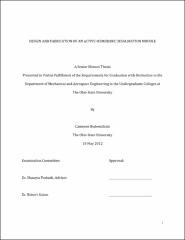 Water shortage is a growing problem that continues to affect people worldwide. According to the Intergovernmental Panel on Climate Change, over 1.2 billion people live in areas that face a physical scarcity of water and another 1.6 billion people live in areas lacking the infrastructure to distribute water. Of the current major desalination methods, membrane separations are favorable to distillation methods due to relatively lower energy requirements. However, they are also subject to irreversible membrane fouling and reduction in flux due to concentration polarization, which leads to less efficient separation. The purpose of this study is to implement a new approach for mitigating concentration polarization, often considered the precursor to membrane fouling, in order to maintain higher efficiency of reverse osmosis salt removal over extended periods of time. A disc tube (DT) reverse osmosis (RO) module based on a commercial Pall-DT system was modified for in-lab testing of this method, which consists of applying an alternating potential to a metalized polymer RO membrane. Our hypothesis was that the AC potential causes a local convective loop formation due to small perturbations to the ion concentration polarization layer as the AC frequency is matched to the typical diffusion time of ions within a few microns of the membrane surfaces. These convective loops generate local mixing regions thereby reducing the effective thickness of the polarization region and improving membrane flux. Fabrication of the RO module included several troubleshooting steps, and the final module is capable of achieving salt rejections of approximately 90%. Testing of the RO module with an applied electrical bias yielded a permeate water flux increase of roughly 14% at a power consumption of 2.7 W.