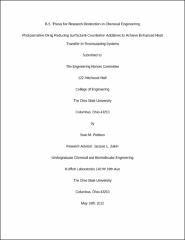 The use of additives in drag reducing (DR) fluid transport is a phenomenon that was discovered in 1931 by Forest and Grierson who observed a reduction in energy loss in turbulent transport of wood pulp fiber suspensions in water (Zakin, Lu, & Bewersdorff, 1998). The first commercial success with polymers as drag reducers was in the Alyeska pipeline. The pipeline used 5 to 25 ppm (later lowered to 1 ppm) of high molecular weight polymer additive that increased the flow rates up to 25% which in turn increased the throughput of the pipeline by as much as 500,000 barrels per day (Zakin, Lu, & Bewersdorff, 1998). The drawback to using high molecular weight polymers as drag reducers is that they degrade when subjected to high mechanical shear stress which is common in most pumps (Zakin, Lu, & Bewersdorff, 1998). Therefore, polymers are not useful in recirculating systems because, once these molecules are destroyed, they will not reform. The application of this project is in district heating and cooling (DHC), recirculating systems that use heated or chilled water to provide heating or cooling to multiple buildings in an urban district. The focus is specifically for use in district cooling applications. Benefits of district cooling in comparison to individual air conditioning (AC) units include: reduction of electrical energy consumption in individual buildings due to centralization of AC which in turn reduces costs and energy consumption overall, centralized maintenance teams which are notably smaller and more responsive than teams responding to individual AC units, and quieter buildings with no bulky equipment on the ground or roof. There are similar advantages in district heating. DHC would benefit from DR additives by decreasing the energy requirements for pumping and thus lowering the operation costs further. Since water constantly recirculates in DHC systems, an 2 additive which can self-reassemble is desirable. Surfactants, which contain both hydrophobic and hydrophilic portions, can reassemble in a matter of seconds after passing through a region of high shear rate or extension (Zakin, Lu, & Bewersdorff, 1998). The hydrophobic and hydrophilic regions of the surfactant can lead to the formation of large micelle structures which form if the overall Gibbs free energy is minimized. This is achieved in cationic surfactant systems by shielding the hydrophobic portion of the molecule by forming clusters in the center of the micelle with the positively charged hydrophillic heads, dispersed by the negative charge of a counterion, at the surface of the micelles. Micelle structures can be spherical, rod-like, lamellar, or vesicles (Zakin, Lu, & Bewersdorff, 1998). In the presence of appropriate counterions, cationic surfactants form threadlike (rod-like) micelles and these networks of threadlike structures are believed to be a necessary for surfactant solutions to be DR (Zakin, Lu, & Bewersdorff, 1998). While cationic surfactant and counterion solutions provide efficient DR in pumping, heat transfer in tube-tube heat exchangers is reduced commensurately (Zakin, Lu, & Bewersdorff, 1998). Threadlike micelles dampen the turbulence in the radial direction which in turn reduces heat transfer in the radial direction (Zakin, Lu, & Bewersdorff, 1998). Thus, the use of cationic/counterion solutions for DR in DHC is not beneficial unless high (water-like) heat transfer properties can be momentarily regained while the solution passes through the heat exchanger. The focus of this research is to overcome this limitation through the use of photosensitive threadlike micelles. When exposed to the right wavelength, such as ultraviolet (UV) irradiation, certain counterions can change from trans to cis (or vice versa), a phenomenon known as photoisomerization (Shi, et al., 2011). The change in geometric configuration makes the binding 3 of the counterion to the surfactant less favorable to micelle formation resulting in shorter micelle structures which are not DR (Shi, et al., 2011). Previous research by Dr. Zakin and co-workers has shown the ability to transform a DR fluid with a photosensitive counterion (trans-OMCA) from trans to cis using UV irradiation and achieve increased heat transfer properties (Shi, et al., 2011). A method to switch the counterion back to a DR active mode was not discovered; however, in this research trans-ACA was determined to have reversible photoisomerization. UV light irradiation causes the counterion to switch from trans to cis, and blue light (BL) irradiation causes the counterion to switch from cis to trans. The objective of this thesis research is to find a surfactant and counterion system that utilizes the photoisomerization phenomenon to achieve alternating DR active and DR inactive properties for use in DHC. Since the focus of this project will be for district cooling, one goal of this project is to find a system that can be switched between DR active and DR inactive at temperatures of 10-15°C generally used in district cooling systems. The second goal is to find a system which can achieve this switch between DR in a timeframe that will be practical for commercial use. If it takes too long to convert between DR properties, the system will not be commercially favorable.