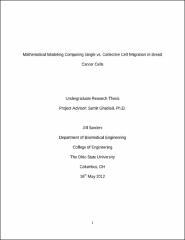 Cell migration is a key feature in metastatic breast cancer. Detachment from the primary tumor to other tissue sites makes breast cancer much more difficult to treat since the disease is no longer localized to its origin. A proposed method of cell detachment suggests cells move as a single unit rather than as a collective sheet. This theory is known as an epithelial to mesenchymal transition (EMT), which indicates a phenotype change allowing cells to become more invasive for increased tumorgenesis. However, this theory is not widely accepted, and little research quantifies or models this method of transition. This project attempts to provide predictive power to characterize single or collective cell migration in terms of mathematical modeling. Modeling was based off analysis from a series of wound healing assays comparing invasive breast cancer cells to a knockdown cell type. Three models were developed comparing a target cell’s motility to its neighboring cells on both sides of the wound. Each model quantifies a combination of direction, distance, and time when comparing a target and neighbor cell’s movement. Results from each model show the knockdown cells as being more correlated, implying that the cells move as a collective unit. These model results along with the results characterizing average velocity, distance, and directionality are indicative of an epithelial phenotype. The consistency of the results across each model support the notion that silencing gene expression in invasive breast cancer cells could change a mesenchymal phenotype to an epithelial phenotype, or MET. Overall the results of each model and parameter analysis provide a more in-depth analysis distinguishing single vs. collective cell migration in breast cancer cells. Furthermore, these models can be easily manipulated based on user preference and used to analyze cell migration in other cell lines.