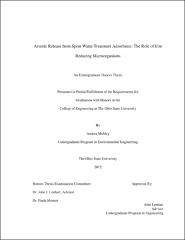 Recent studies have shown that arsenic can be released from spent iron-based sorbent media (IBS) disposed in municipal landfills. The reasons for this release are not completely understood, as there are many chemical and biological processes that may possibly result in this release. The purpose of this research is to understand the biological causes as a result of the dissimilatory reduction of iron oxides by using the iron-reducing bacteria, Geobacter Metallireducens GS-15. GS-15 was first cultured and transferred before being tested with dissolved iron, dissolved arsenic, and solid iron goethite media types. GS-15’s electron donor metabolism capabilities were tested. Arsenic release was determined under three amended media conditions with the use of arsenic loaded solid goethite, a media similar to spent IBS. It was determined that with the use of dissolved iron only acetate was utilized as an electron donor; however, this was not observed for the solid iron goethite media, where the utilization of citrate was observed. The dissolved arsenic conditions did not sustain growth of GS-15. Arsenic release in the presence of GS-15 was lower than that observed in abiotic samples when citrate was the electron donor. With acetate as the electron donor and with acetate and the presence of elevated phosphate; however, the release was greater with the presence of GS-15 than that observed in the abiotic samples. Further studies need to be conducted to determine why the reduction of citrate occurred as this has not been previously observed. Addition studies need to be conducted to understand the release of arsenic with other elevated anion levels to understand fully the impact of iron reducing microbes on the spent IBS media in landfill conditions.