Nanopatterned Surfaces for the Exploration of Cell Behavior 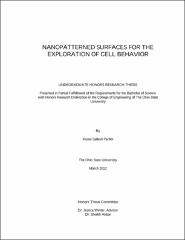 Surfaces with ordered, nanopatterned roughness have demonstrated considerable promise in directing cell morphology, migration, proliferation, and gene expression. However, further investigation of these phenomena has been limited by the lack of simple, inexpensive methods of nanofabrication. Here, we report a facile, low-cost nanofabrication approach based on self-assembly of a thin-film of gadolinium-doped-ceria on yttria-stabilized zirconia substrates (GDC/YSZ). This approach yields three distinct, randomly-oriented nanofeatures of variable dimensions, similar to those produced via polymer demixing, which can be reproducibly fabricated over tens to hundreds of microns. As a proof-of-concept, we examined the response of SK-N-SH neuroblastoma cells to features produced by this system, and observed significant changes in cell spreading, circularity, and cytoskeletal protein distribution. Additionally, we show that these features can be imprinted into commonly used rigid hydrogel biomaterials, demonstrating the potential broad applicability of this approach. Thus, GDC/YSZ substrates offer an efficient, economical alternative to lithographic methods for investigating cell response to randomly-oriented nanotopographical features.