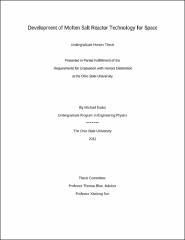 Nuclear reactors are an appealing energy technology for space applications because of their ability to supply large amounts of power over extend periods of time regardless of the proximity to the sun. Specific space applications ideal for nuclear reactors include nuclear electric propulsion for fast manned travel to Mars or surface power for long term human settlements on the Moon or Mars. A unique subclass of molten salt reactors (designated fuel-in-salt reactors) utilizes fissile material dissolved in a molten salt as an alternative to solid nuclear fuels. Initial work at The Ohio State University funded through the NASA Steckler Space Grant on fuel-in-salt reactors for space applications indicates favorable characteristics such as high power densities, high fuel burn up percentages, and high temperature operation. However, little research has been done on the application of fuel-in-salt reactor technology to space applications such as nuclear electric propulsion and surface power and the reactors are not as well understood as solid fuel reactors. A central part of the continuing research is to determine and understand the unique design considerations of molten salt reactors. Some methods employed in this work include Brayton cycle analyses, reactor dynamics, and fuel salt chemistry modeling using CALPHAD methods. With this work, the general space fuel-in-salt reactors’ design space has been narrowed and figures of merit for key systems have been identified. Key relations that have been derived included relating to hottest temperature in the power conversion cycle to total system mass, and how the rate the fuel effects circulates control parameters among others. This work will aid in the continued development of space fuel-in-salt reactors. The long term goal of the work is to aid in extending mankind’s reach into the space.