Tragedy, Temporal Sterility, and No Futurity in Faulkner and Camus 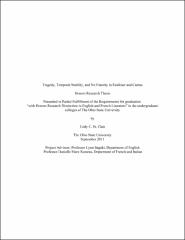 This study endeavors to expand yet condense the Faulknerian-Camusian relationship according to two principal subjects: time and tragedy. Broadly, this study contends that both Faulkner and Camus present time and the experience of time as a human tragedy relative to the motif of sterility that pervades both their canons. Thus, this study intends several objectives: (1) to establish how time, according to both Faulkner and Camus, is tragic; (2) to examine how sterility is relevant to time; (3) to delineate how and where sterility presents itself in both authors’ works; (4) to demonstrate the temporal implications and ramifications of sterility as depicted by both authors; and (5) to elucidate how Faulkner and Camus exhibit the temporality of sterility as gravid with tragedy. I then organize this study into three chapters that accentuate different “types” of sterility or topics wherein sterility becomes crucial. The first chapter will examine the temporal implications of infanticide and the Child according to the nuclear family, reproduction and genealogy, futurism and the future of humanity. This chapter will consider infanticide in Faulkner’s "Requiem for a Nun" and Camus’s "Le Malentendu" as symbolic of the destruction of the nuclear family as well as the political and philosophical ramifications of infanticide broached in Camus’s "Les Justes". Building on the issues of the Child, reproduction, and the family, the second chapter will consider the differences between feminine and masculine modalities of time and the friction between these modalities that arises within the topics of masculine supremacy and hetero-(masculine)-normativity; castration, emasculation, and impotence; sexism, misogyny, and gynocide. This chapter examines the feminine temporalities of Temple Drake from Faulkner’s "Sanctuary" and Janine from Camus’s “La Femme Adultère” and how both women’s experience of time changes as they suffer the abuses of an overbearing, castration-fearing masculine order. Nevertheless, this chapter will also explore the castrated/emasculated/de-masculinized temporalities of Quentin and Jason Compson in Faulkner’s "The Sound and the Fury." Finally, the third chapter will then focus on the presence of a queer temporality as distinct from and opposed to the heteronormative temporal modalities within the conventions and issues surrounding procreation, childrearing, and the nuclear family. This chapter will then reconsider Quentin Compson as a queer character and his experience of time as indicative of a queer temporal modality as I analyze his “perverted” love of death and the metonymic displacement of desire that defines his concealed passion for his roommate, Shreve. I will then end this chapter and my study with an examination of Camus’s Caligula as a queer character with a distinctly queer time relative to the issues of repressed sexual desires, the pressures of heteronormative sexual and social conventions, performativity, and the death drive. Ultimately, I argue that the effects of Faulkner’s and Camus’s representations of time via sterility induce an irresolvable confusion of and within time that eventually paralyzes these characters in a hopeless present, devoid of futurity, trapped within a perpetual yet irredeemable past.