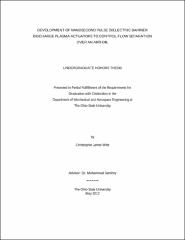 Separation of flow from the surface of an airfoil is a great limiting factor in the development of aerodynamic capability. Many methods of controlling or eliminating separation have been explored, but a relatively new technique involves affecting the flow field with a plasma actuator adhered to the surface of the airfoil. Extensive research using a specific type of actuator that utilizes dielectric barrier discharge (DBD) has shown that separation of flow from an airfoil can be reduced or eliminated when forced at the proper frequency. Furthermore, a shift from an alternating current (AC) to a nanosecond (NS) pulsed system has demonstrated control authority at various post-stall angles of attack (alpha) for Reynolds numbers (Re) and Mach numbers (Ma) up to 1.15x 10^6 and 0.26 respectively (free stream velocity, U=93 m/s). The control mechanism for the NS-DBD is a thermal perturbation that creates strong compression waves that radiate into the freestream flow, resulting in either an active trip of the boundary layer, or the generation of coherent spanwise vortices that transfer momentum to the separated region. Such actuators were incorporated into two feedback control systems. An on/off controller was successfully established, but an extremum-seeking algorithm demonstrated only sporadic effectiveness.