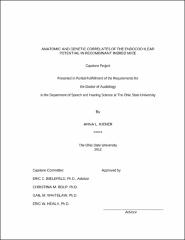 Since the endocochlear potential (EP) cannot be measured in humans, mouse models offer a useful way to investigate the pathophysiology of strial presbycusis and to potentially identify responsible genes. Two inbred strains of mice (C57BL/6J and BALB/cJ) have been shown to differ in terms of the EP and strial anatomical correlates. In contrast to C57BL/6J (B6) mice, BALB/cJ (BALB) mice have a lower EP, which coincides with a decreased number of marginal cells and a thinner spiral ligament in BALBs. To further investigate this relationship, and estimate the number of gene(s) responsible for the lower EP in BALBs, 11 recombinant inbred (RI) strains created from crosses between B6 and BALB mice were examined. Cochlear morphometric data gathered for the RI strains suggest that the responsible genes most prominently influence marginal cell density in the stria vascularis. Analysis of EP data using WebQTL online mapping utility revealed a suggestive linkage to a ~7Mb segment of Chromosome 12 (provisionally named Nvep1) and a suggestive linkage to Chromosome 15 (Nvep2). Analysis of marginal cell data using WebQTL revealed a suggestive linkage to the same ~7Mb segment of Chromosome 12 (Nvep1). Since Nvep1 maps to same general location as does marginal cell density, this supports the suggestion that subtle differences in marginal cell density (or a related property) in part determine the EP. Since marginal cell density corresponds to both the 'low normal' EP in young BALBs as well as age-associated EP decline in BALBs, the Nvep1 region may encompass a 'strial presbycusis' predisposing gene.