Effects of self-validation on counterfactuals 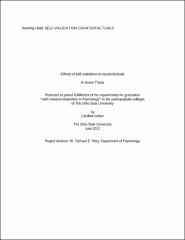 Counterfactuals, or mental simulations of alternative realities (e.g., “If I invite him to the wedding, then we will have to spend a lot of time together”), greatly influence judgment and decision making. In the current research, the certainty with which people held their counterfactuals was manipulated. Three potential explanations for the results of this research will be proposed. One possibility is that when people are certain of their counterfactual-relevant thoughts, they will serve to impact their behavior more. Another possibility is that doubt will increase the apparent impact of counterfactuals over certainty, either because doubt primes make the potential negative outcomes seem more negative, thereby increasing motivation to avoid them, or because certainty primes make people feel less worried about the negative outcomes because they have gained a sense of self-assurance from the certainty prime. To test these hypotheses, students were told to consider a hypothetical situation, generate relevant counterfactuals about one of two possible behavioral choices, and then were primed with either certainty or doubt. Finally, they were asked to choose between the two possible behaviors. Ultimately, the results were consistent with the second and third hypotheses: doubt was associated with greater impact of counterfactual-generation on behavior. This research contributes to the literature on counterfactuals by examining a novel hypothesis and suggesting mechanisms by which counterfactuals can be more or less impactful on subsequent choice.