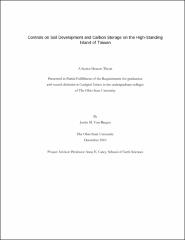 Studies on weathering rates of high standing islands (HSIs) have shown high observed rates of chemical weathering. However, attempts to correlate these rates to sources have often suffered due to a lack of sufficient soil geochemical data. Furthermore, few studies have attempted to determine a relationship between soil organic carbon content, storage, and seq uestration with uplift and erosion rates. Taiwan sits on top of a highly active convergent plate boundary between the Eurasian and Philippine Sea Plate, which results in intense uplift, creating the orogenic mountains that make up the island. The plate margin has uplift rates >10 mm/yr and contains erosional features dominated by mass-wasting. The island also contains three of the nine rivers in the world which have average sediment concentrations >10 g/l (Milliman and Syvitski, 1992). This study determined organic carbon, inorganic carbon, and a relative amount of weathering in soils between three locations on Taiwan with different lithology and seismicity and with various rates of uplift, runoff, and erosion. Soils exhibited relatively higher concentrations of organic carbon and more developed soil profiles in areas where these erosional factors play a limited role.